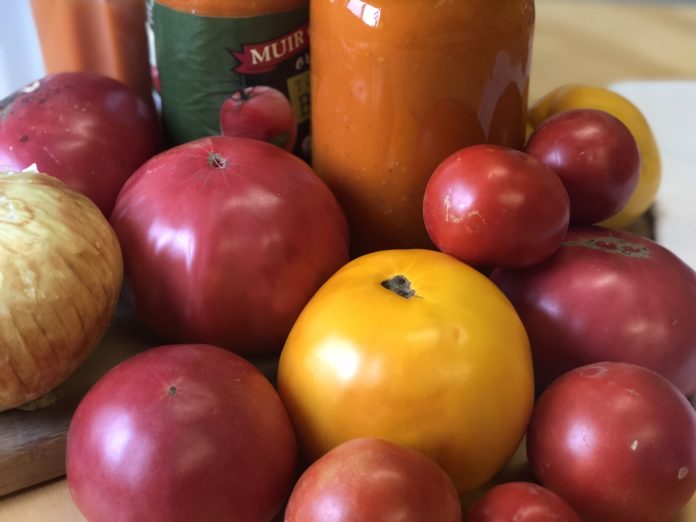 Late summer and early fall are beautiful seasons in northern Michigan. Even though we had a dry summer, some good gardeners and farmers have had bumper crops of tomatoes, and my favorite farmer, Joan Olds, had plenty of heirloom varieties to spare. Time to make sauce!

There is a very famous tomato sauce recipe that has made the rounds of articles, cooking shows, and blogs for many years. The author is Marcella Hazan, who is to Italian cooking what Julia Child is/was to French cooking. She was an amazing cook and author – five best-selling cookbooks and many TV appearance – and you really should take a moment to check out her work.

Her sauce is unusual in that there are only three ingredients – until you add the salt and pepper. Tomatoes, a stick of butter and one onion, typically cut in half and thrown into the pot. That’s it! The butter lends a velvety texture and the onion gives just a hint of flavor, really bringing out the low notes in the tomato symphony.

Could this recipe be replicated in the Instant Pot, thus making it possible for cooks with little time to enjoy the fruits of a great tomato season? Yes. This sauce turned out beautifully, and it is elegantly simple.

You can use any kinds of tomatoes, and/or many kinds at once. You can basically clean them and throw them in the pot! You can even make the recipe with canned tomatoes.

NOTE: Once you have the hot tomato sauce, you can ladle or funnel it into glass jars, and if you put lids on them right away they will seal. This is NOT a safe way to can them, so if you want to keep the sauce for several months, put the jars through an actual canning process.

Find out how easy it is to make Fresh Tomato Sauce in the Instant Pot!